Klayman: So Much for Appreciation: Bush Should Have Left Saddam Hussein in Power! One American Life Is Too Much To "Defend" These Pro-Iran Shiites! 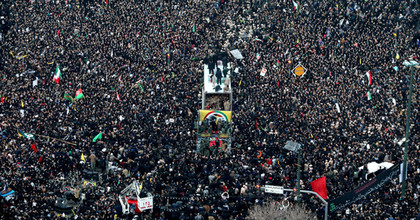 Iraqi Lawmakers Urge End to U.S. Troop Presence as Iran Mourns a Slain General
By Alissa J. Rubin, Steven Erlanger and Farnaz Fassihi
New York Times
January 5, 2020
BAGHDAD — Lawmakers in Iraq voted on Sunday to require the government to end the presence of American troops in the country after the United States ordered the killing of the Iranian leader of the elite Quds Force, Maj. Gen. Qassim Suleimani, on Iraqi soil.

The decision to heed the demands of angry Shiite factions and politicians came as hundreds of thousands of mourners poured into the streets of Iran to pay their respects to General Suleimani, the most powerful figure in the country after the supreme leader, Ayatollah Ali Khamenei.

The vote is not final until Prime Minister Adel Abdul Mahdi of Iraq signs the bill. But since he drafted the language and submitted the bill to Parliament, there was little doubt he would sign it.