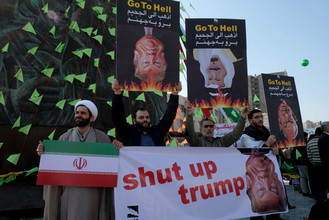 Fox News judge predicts Trump will "start a war with Iran" and meet with Putin at Mar-a-Lago in 2020
Newsweek
January 3, 2020
Andrew Napolitano, a former judge, also predicted President Donald Trump would "give up building the [Mexican border] wall because the land on which he wants to build is owned by Republicans who won't sell to the government." So far, about 100 miles of border wall have been completed under Trump's watch, but those have all been constructed where previous barriers had become dilapidated or where there were outdated designs. The president is facing legal challenges from ranchers and landowners who would be forced by the government to give up chunks of property for the construction to move forward.

Throughout Napolitano's survey of predictions, there were several potential answers that were blatantly snarky, although Napolitano avoided selecting those options. In terms of Trump's relationship with Putin, the judge could have picked "agree to produce a shirtless 2021 calendar together," a clear attempt to mock the two leaders' relationship and nod to the fact that Putin actually does release an annual calendar featuring himself shirtless. Another potential survey answer that was not selected by Napolitano suggested that in the coming year Trump would "pick more fights than a fourth-grade schoolyard bully."