Klayman: The Jewish Left Also Bears Responsibility in the Terrible Rise of Anti-Semitism and Attacks! Their Unhinged Hatred of and Actions Against Trump and His Supporters, in Congress, the Media, the Federal Courts and Elsewhere Are Creating an Anti-Semitic Backlash That Harms the Majority of Jews!
Join and Support Our Coalition of the Jewish Right at www.FreedomWatchUSA.org 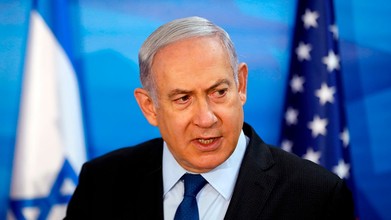 Israel's Netanyahu condemns 'vicious attack' at Hanukkah celebration in New York
By Justin Wise
TheHill
December 29, 2019
Israeli Prime Minister Benjamin Netanyahu on Sunday expressed outrage after five people were stabbed during a Hanukkah celebration at the home of a Hassidic rabbi in a New York town with a large ultra-Orthodox Jewish community.

"Israel strongly condemns the recent displays of antisemitism including the vicious attack at the home of a rabbi in #Monsey, New York, during Chanukah," Netanyahu said in a statement.

"We send our best wishes for recovery to the wounded. We will cooperate however possible with the local authorities in order to assist in defeating this phenomenon."