Klayman: Hannity Boosts His Ratings and Fox News' Ad Revenues by Repeatedly Offering Phony "Red Meat" Optimistic Predictions to Conservative Viewers Who Take His BS Hook Line and Sinker! His Lies Do a Disservice to the Conservative Movement!
Go to www.FreedomWatchUSA.org to Join and Support Our Leftist Media Strike Force! Share and Donate 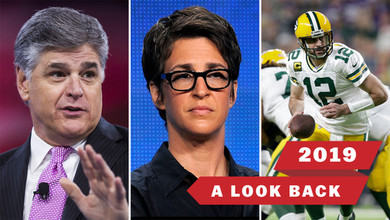 Cable news networks Fox News and MSNBC and sports-focused ESPN repeated as 1-2-3 atop all basic cable networks in total viewers in Live+7 Nielsen ratings for 2019. That is all the more impressive because live non-entertainment programming gets very little delayed viewing, and even more important for advertisers who put a premium on ad-supported content where commercials can't be skipped.

Fox News was the top-rated basic cable network among total viewers for a fourth year in a row, with an average of 2.57 million in L+7. In second place was a news network on the other side of the deepening partisan fault line, MSNBC, with 1.80 million, according to Nielsen. CNN notched an average of 1 million.