Klayman: And Americans See Conway as a Fat Loser Slob! 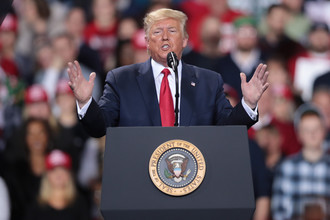 The frequent presidential critic responded to a tweet by the president in which he complained about challenges he's faced in dealing with foreign leaders. Trump claimed it is "difficult to deal with foreign leaders (and others) when I am having to constantly defend myself against the Do Nothing Democrats & their bogus Impeachment Scam."