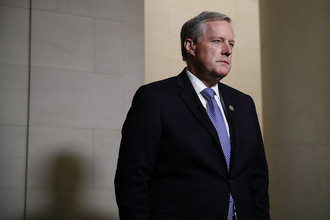 First in POLITICO Playbook: Mark Meadows to leave Congress, plus what McConnell will say on impeachment
By Jake Sherman, Anna Palmer
POLITICO
December 19, 2019
NEW ... REP. MARK MEADOWS (R-N.C.), one of President DONALD TRUMP'S top allies, is not seeking re-election, and tells Playbook he could leave the House in the middle of this term to begin a new, yet presently undefined role helping TRUMP.

"OBVIOUSLY, I'VE LOOKED AT THIS AS A TEMPORARY JOB," Meadows told us in an interview Wednesday, speaking of serving in the House. "Endorsed term limits -- never ran on a term-limit pledge. Every year it's a decision whether you're going to run again. Probably the hardest thing for me was the timing of this, because the president has accomplished so much. I'm not only an ally, but will continue to be an ally. And we've had discussions on how we can work more closely together in the future and I felt like filing and then potentially resigning at some point in the future would not serve my constituents in North Carolina best."