Klayman: Ironic That the Most Corrupt Obama AG Eric Holder in Modern History Calls Out the Hapless Trump AG Bill Barr: Holder Should Be Happy With Barr as the Latter Only Talks Big and Then Does Nothing!
Go to www.FreedomWatchUSA.org and Support Our Citizens Grand Juries and Join Our Justice League! 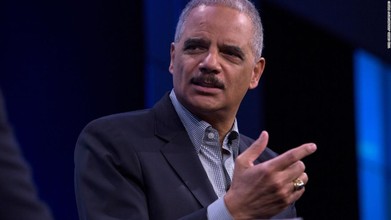 Eric Holder says Barr 'unfit' to serve as attorney general
By Devan Cole
CNN
December 12, 2019
Washington (CNN)Former Attorney General Eric Holder believes William Barr is "unfit" to serve as the nation's top law enforcement officer, writing in a Washington Post op-ed that recent controversial comments by his successor "have been fundamentally inconsistent with his duty to the Constitution."

In the opinion piece published Wednesday night, Holder, who served in the Obama administration between 2009 and 2015, excoriated Barr for "a series of public statements and ... actions that are so plainly ideological, so nakedly partisan and so deeply inappropriate" for an attorney general to make. He pointed to a number of recent headline-grabbing remarks by Barr, including his comments this week that the FBI may have acted in "bad faith" when it opened an investigation into the origins of the Russia probe despite the Justice Department's inspector general report that said the bureau was justified in doing so.