Klayman: As Predicted Establishment Repubs Poised to See President Out!
Go to www.FreedomWatchUSA.org and Support Our Citizens Grand Juries and Join Our Justice League! 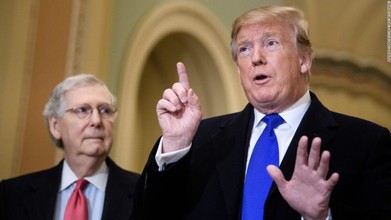 In conversations with the White House, the Kentucky Republican has made clear he hopes to end the trial as soon as he can, an effort to both get impeachment off his lap and protect his conference from potentially damaging votes should the process break out into partisan warfare. That will include a continuous whip count until McConnell feels he has the votes to acquit the President and end the show. He has even floated a 10-day minimum during these talks, one person said.

But the show is exactly what Trump wants. He's made clear to advisers privately that rather than end the trial as quickly as possible, he is hoping for a dramatic event, according to two people familiar with his thinking. He wants Hunter Biden, Rep. Adam Schiff and the whistleblower to testify. He wants the witnesses to be live, not clips of taped depositions. And he's hoping to turn it into a spectacle, which he thinks is his best chance to hurt Democrats in the election.