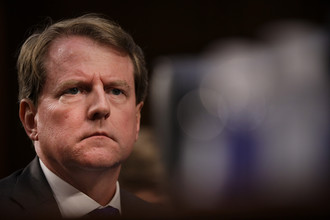 Judge denies DOJ request for stay on Don McGahn testimony
By Darren Samuelsohn, Josh Gerstein
POLITICO
December 3, 2019
House Democrats on Monday notched another legal victory in their pursuit of critical testimony tied to their impeachment efforts, though the ruling may be short-lived because the case is already on temporary hold while it works its way toward an appeal.