Klayman: But No Twitter Ban for Muslim Jew Hater Ilhan Omar!
Go to www.FreedomWatchUSA.org to Join and Support Our Leftist Media Strike Force! Share and Donate 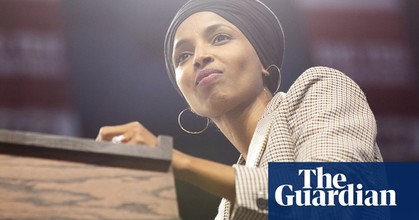 Ilhan Omar's Republican opponent in Twitter ban over 'hanging' posts
By Victoria Bekiempis
the Guardian
November 29, 2019
A campaign account for Danielle Stella, a pro-Trump Republican candidate for Congress, was banned from Twitter after it published a violent comment about the Democrat she hopes to unseat next year, Minnesota representative Ilhan Omar.

Stella's campaign Twitter account, @2020MNCongress, featured at least two posts involving the idea of Omar being hanged, according to the Washington Times, which broke the story of her suspension. embed

The tweets concerned an unsubstantiated allegation that Omar — one of the first Muslim women elected to Congress — shared sensitive information with Qatar, which then wound up with Iran.