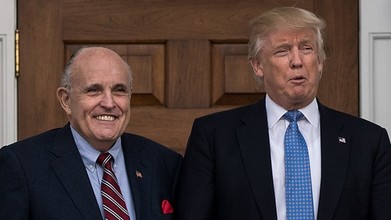 Trump Denies Giuliani Acted on His Behalf in Ukraine: 'Rudy Has Other Clients'
The Daily Beast
November 27, 2019
President Donald Trump appeared to hang his personal lawyer out to dry in an interview with former Fox News host Bill O'Reilly on Tuesday night, insisting that Rudy Giuliani's push for a Biden investigation in Ukraine was not done on his behalf and noting that Giuliani has "other clients."

Asked point-blank if Giuliani was acting on his behalf in trying to dig up dirt on former Vice President Joe Biden—an issue now at the heart of an impeachment inquiry—Trump said, "No, I didn't direct him, but he is a warrior, he is a warrior."