Klayman: Fox News's Napolitano Is Like a Jilted Lover With Trump: The President Smartly Refused to Give Him a Job and This Second Rate Past "Judicial Clown" Is Retaliating!
Go to www.FreedomWatchUSA.org to Join and Support Our Leftist Media Strike Force! Share and Donate 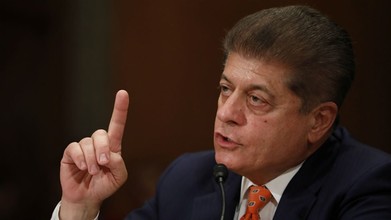 Fox's Napolitano sees evidence to 'justify about three or four articles of impeachment against the president'
By Joe Concha
TheHill
November 23, 2019
Fox News senior judicial analyst Judge Andrew Napolitano said in an interview with Reason.com published Friday, he believes there could be 'three to four articles of impeachment" against President Trump, including bribery, high crimes and misdemeanors and obstruction of justice.

"The Democrats on the House Intelligence Committee have unearthed enough evidence, in my opinion, to justify about three or four articles of impeachment against the president," Napolitano told Reason.com's Nick Gillespie.

"One is bribery. The allegation is the technical definition of bribery is the failure to perform an official duty until a thing of value comes your way," continued Napolitano. "And they will argue that the president's failure to disperse funds that the Congress ordered, they dispersed until the recipient of the funds agreed to investigate a potential political opponent is an act of bribery. That is enough, in my opinion, to make it over the threshold of impeachable offenses. I don't think it's enough to convict of bribery, but it's enough to allege it for the purpose of impeachment.