Klayman: Lachlan Murdoch-Run Fox News Continues to Stab Trump in the Back!
Go to www.FreedomWatchUSA.org to Join and Support Our Leftist Media Strike Force! Share and Donate 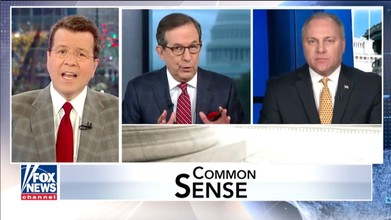 Fox News Host Hits Trump for Attacking Chris Wallace: You're 'Not Entitled to Praise'
The Daily Beast
November 19, 2019
Fox News aired a rare bit of "Common Sense" on Monday afternoon when host Neil Cavuto ended his show with a strong defense of his colleague Chris Wallace, who earned the wrath of President Trump for daring to challenge House Minority Whip Steve Scalise (R-LA).

Trump tweeted on Sunday that Scalise "blew the nasty & obnoxious Chris Wallace (will never be his father, Mike!) away on Chris's lowest rated (unless I'm on) morning show," adding, "This kind of dumb and unfair interview would never have happened in the @FoxNews past."