Klayman: The Other Dishonest Face of Fox News!
Go to www.FreedomWatchUSA.org to Join and Support Our Leftist Media Strike Force! Share and Donate 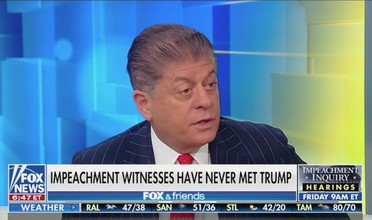 Napolitano appeared on the very pro-Trump Fox & Friends program and, after some rather predictable discourse following the first day of hearings, co-host Ainsley Earhardt tried to pour cold water on the quid pro quo allegations that lay at the heart of the impeachment proceedings.

Earhardt noted that there really couldn't be a quid pro quo because "the Ukrainian president didn't ever feel pressure and he got his money," before asking "Do we know if he turned anything about Biden to the president?" Co-host Brian Kilmeade joked"This is the worse shakedown ever."