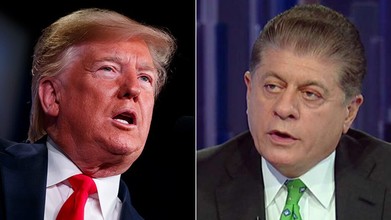 Republicans offered more participation in Trump impeachment inquiry than in Nixon's, Judge Napolitano says
By Charles Creitz
Fox News
November 13, 2019
Despite an outcry by some in the GOP, Republicans have largely been given more ability to participate in House Democrats' impeachment inquiry into President Trump than the minority party has in the last two such proceedings, according to Judge Andrew Napolitano.

During impeachment proceedings against ex-Presidents Richard Nixon and Bill Clinton, data and initial testimony from witnesses was obtained in private and controlled largely by the majority party, Napolitano said Tuesday on "Your World."

"We saw it with [Rep.] Henry Hyde ,[R-Ill.], who was the chair of the House Judiciary Committee when the Republicans were pursuing Bill Clinton," he said.