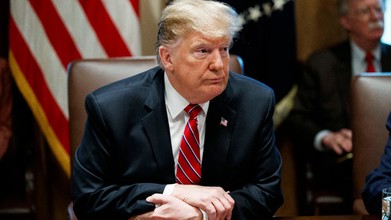 Fox News Poll: 49 percent favor impeaching Trump
By Dana Blanton
Fox News
November 3, 2019
Nearly half of voters want President Trump impeached and removed from office, according to a new Fox News Poll. In addition, 6-in-10 believe the president did ask foreign leaders to investigate political opponents -- and two-thirds say that action is inappropriate.

Forty-nine percent want Trump impeached and removed from office, 4 percent say he should be impeached but not removed, and 41 percent oppose impeaching Trump. That's about where things stood in early October, when 51 percent said impeach/remove, 4 percent impeach/don't remove, and 40 percent opposed altogether.

The two-point dip in support for impeachment comes from a 5-point decline among Republicans, as 8 percent favor impeachment now, compared to 13 percent in early October.