Klayman: Napolitano Who Once Stole the Trademark Freedom Watch Is the New Fox News!
Go to www.FreedomWatchUSA.org to Join and Support Our Leftist Media Strike Force! Share and Donate 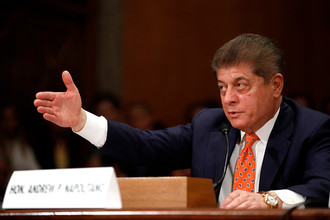 Fox News judge says the "proof" in Trump impeachment inquiry is "undisputed," despite president's "hoax" claims
Newsweek
November 3, 2019
"One can see that the reason Republicans have been attacking the process of impeachment is largely because there is no credible defense to the proof of impeachment. That proof has been hiding in plain sight—in the president's public words and the context to be provided by witnesses—and will soon be revealed."

Napolitano had previously defended House Democrats and their approach to the impeachment probe during an appearance on Fox & Friends on Thursday morning.

"Congressman Schiff is, in my opinion, following the rules of the House of Representatives. You generate the information in secret. You decide which you want to make public. You can't use anything against the president that hasn't been challenged and aired in public," Napolitano said.