Klayman: Really Creepy: Hillary's Laugh About Killing Epstein! Did She Also Laugh When 80 Plus Persons Died During Her Years in the White House? 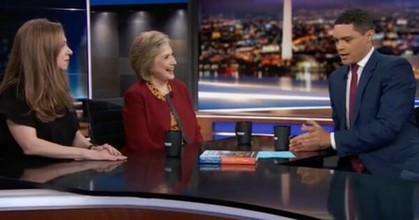 Trevor Noah asks Hillary: How did you kill Jeffrey Epstein?
By WND Staff
WND
November 1, 2019
After a famed pathologist said he thinks Jeffrey Epstein was murdered, Comedy Central host Trevor Noah jokingly asked Hillary Clinton in an interview Thursday how she did it.

"I have to ask you a question that has been plaguing me for a while: How did you kill Jeffrey Epstein?" Noah asked Clinton, who appeared with her daughter, Chelsea, to promote their new book.

Noah, saying she's been a "boogeyman" for the right, kept up the irony.