Klayman: Hillary Is the Russian and Ukrainian Asset and Anyone Else Who Can Easily Bribe Her and Bill Clinton!
Go to www.FreedomWatchUSA.org and Support Our Citizens Grand Juries and Join Our Justice League! 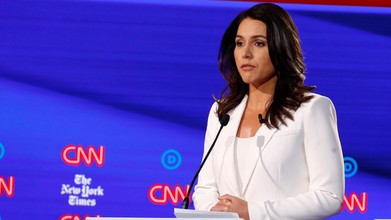 Speaking directly to the camera in a video message posted on social media on Sunday, 2020 presidential candidate Tulsi Gabbard suggested that Hillary Clinton recently "smeared" her as a "Russian asset" as payback for Gabbard's defiance of the party establishment in 2016.

"If they can falsely portray me as a traitor, then they can do it to anyone -- and in fact, that's exactly the message they want to get across to you," Gabbard, a Democrat, said in the video.