Klayman: Fox News's Chris Wallace Has Become the Tool of the Left: It's Why He Is Constantly Cited by the Daily Beast!
Go to www.FreedomWatchUSA.org to Join and Support Our Leftist Media Strike Force! Share and Donate 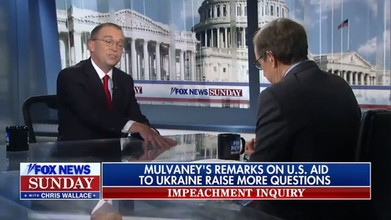 Mick Mulvaney Melts Down Under Brutal Grilling By Fox's Chris Wallace
By Justin Baragona
The Daily Beast
October 20, 2019
Days after his disastrous White House press briefing in which he admitted President Donald Trump was seeking out a quid pro quo with Ukraine before saying never mind, acting White House Chief of Staff Mick Mulvaney struggled to walk back his comments under the intense and relentless grilling of Fox News Sunday anchor Chris Wallace.

Almost immediately during the Sunday morning broadcast, Wallace pressed Mulvaney on his remarks, asking why he said during the press conference that military aid to Ukraine depended on investigating the actions of Democrats during the 2016 election, prompting Mulvaney to assert that he never actually said that.