Klayman: The NBA Has Become a Total Disgrace: Now It's Also Officially Anti-Semitic and Anti-Israel: Maybe It Can Now Get a Contract With Hamas to Play Ball in Gaza! 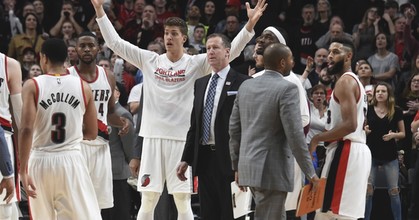 NBA team denies sponsorship with Israel ties ended over anti-Israel scrutiny
Washington Examiner
October 12, 2019
The Portland Trail Blazers issued a statement refuting reports that the team's sponsorship with a rifle scope manufacturer who has contracts with the Israeli military were ended as a result of protests.

The team issued a statement Thursday night claiming that their sponsorship with Leupold & Stevens ended after last season, and that the company opted not to renew their agreement.

"Leupold's sponsorship contract officially expired at the end of last season and Leupold & Stevens made the decision not to renew," the Trail Blazers said in a statement posted on the team's Twitter account. "Their decision was business-related and not influenced by external pressure as being misreported by certain media outlets."