Klayman: The More Things Change the More They Remain the Same! 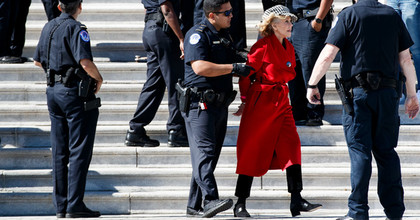 Jane Fonda Arrested During Climate Protest Outside U.S. Capitol
By Neil Vigdor
New York Times
October 12, 2019
Jane Fonda was arrested outside the United States Capitol on Friday as part of a climate change protest, a high-profile act of civil disobedience by the Oscar-winning actress and Vietnam War objector, who said that she planned to reprise her role every Friday for the rest of the year.

Ms. Fonda, 81, was among 16 people charged with unlawfully demonstrating on the East Front of the Capitol, a misdemeanor under a Washington law prohibiting protesters from obstructing public building entrances, Capitol Police said.

She had just finished speaking as part of a Fire Drill Fridays protest, the first of a weekly series of planned climate change demonstrations, when she was taken into custody at 11:50 a.m. local time. Ms. Fonda was later released on her own recognizance.