Trump Lashes Out at Fox News Poll as Barr Meets With Murdoch
Go to www.FreedomWatchUSA.org to Join and Support Our Leftist Media Strike Force! Share and Donate 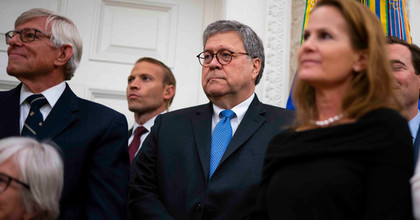 New York Times
October 10, 2019
Aides to both Mr. Murdoch and Mr. Barr declined requests for comment on the meeting.

The visit took place as the impeachment inquiry into Mr. Trump by House Democrats has gathered momentum. Mr. Barr has emerged as a key defender of the president's concerns about the investigation into Russian interference in the 2016 election. Mr. Barr was criticized in the spring for his handling of the report by the special counsel, Robert S. Mueller III, before it was released publicly.

Mr. Trump has sought out Mr. Murdoch's opinion on a wide range of issues in the past, and Fox News has provided Mr. Trump with key support both as a candidate and as president.