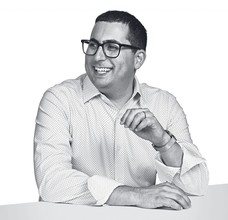 By Rob Brunner
Washingtonian
September 17, 2019
Republican DC Council candidate Michael Bekesha has been running a sort of balance-beam campaign in which he positions himself as a moderate, socially progressive "urban Republican" while continuing to work for the right-wing, pro-Trump organization Judicial Watch. That dance got a lot harder to pull off this weekend, after a clip made the rounds on Twitter of Judicial Watch's Chris Farrell on Lou Dobbs Tonight pushing what seems to be an anti-Semitic conspiracy theory of the type that fueled the Pittsburgh shooter this weekend. The SVP of programming at Fox Business News has now condemned Farrell's comments, and Farrell has reportedly been banned from both Fox News and Fox Business.

But what does Bekesha think? Having interviewed the candidate not long ago, I wanted to know how he would respond to a top leader at his organization spreading this kind of thing on national TV. So on Sunday morning, I sent him an email to find out.