Klayman: While I Do Not Support Whitehouse I Am Amazed by Fitton's Hypocrisy as He, a Non-Lawyer, Effectively Holds Himself Out as Practicing Law Without a License!
Join Freedom Watch's Justice League at www.FreedomWatchUSA.org 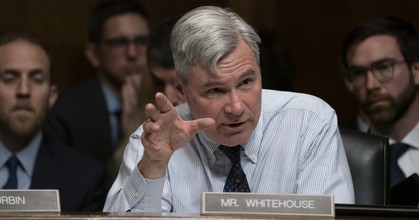 Conservative watchdog group hits senator with complaint for controversial Supreme Court brief
Washington Examiner
August 21, 2019
A nonprofit legal group has filed a complaint with the Rhode Island Supreme Court against Sen. Sheldon Whitehouse over a controversial brief that he and four other Democratic senators filed which some viewed as an attempt to bully the U.S. Supreme Court.

Judicial Watch accused the Rhode Islander of practicing law without proper authorization when he filed a friend-of-the-court brief with the nation's highest court in a gun case from New York.

As an inactive member of his state's bar, Whitehouse cannot practice in the state, but Judicial Watch said he did so in filing the document on behalf of Democratic Sens. Mazie Hirono of Hawaii, Richard Blumenthal of Connecticut, Dick Durbin of Illinois and Kirsten Gillibrand of New York. The conservative group also notes Whitehouse is not a member of the District of Columbia bar. But the Rhode Island Democrat is a member of the Supreme Court bar, his office said.